Starico is platform-agnostic, that means that aren’t taken in consideration reference platforms except for information and statistics purpose. Why? Again, a metaphor can be much more effective than a thousand words.

What is better to listen music, Vinyl or CD? The first one is quality higher, but requires more maintenance than the second one. However, can the intrinsic quality of the music directly depend on the storage medium?

What’s better to watch a movie, DVD or Blu-Ray? The answer seems obvious: Blu-Ray is superior and requires no more maintenance than DVD.

So, the support doesn’t affect the intrisic quality of the work. Some might argue saying: “But the quality of the platform, in some way, can influence the experience, that’s evident! A PlayStation 4 is clearly better than a Playstation 2”. Of course it is, as an old VHS haven’t the same quality as a Blu-Ray.

The answer to the question, in a certain sense is obvious and could lead someone to disappointment, but there’s none more realistic, effective and eradicated by prejudices of:

The best platform to play a game is the better quality platform available on the market; or at least, the best available according to our budget.

Certainly there are several factors to be considered to determine what we mean as “better quality“: hardware power, services, freedom of choice, price of the games, but you don’t (or at least, you should not, but it’ll be more clear in the next paragraph) absolutely consider what games are available for a specific platform.

From that point of view, PC, being expandable and able to be assembled based on our budget, and being long-term compatible (it’s still possible to play games released 30 years ago) it reveals almost always the best choice to play. Like using vinyls, however, requires more attention and maintenance than a normal console. This is a limitation for less experienced users that, maybe, future Steam Machines may contain. Not only, making PC compatible with the living room experience, they could push console makers to take a further step towards to the slow, but inevitable and already in place transformation of consoles in living room PCs.

The real problem of the myriad of platforms available on the market, the decisive one, is not qualitative.

Console war is a cancer

Console war is a cancer. Game exclusives are a cancer. Fanboys who went exalted also with restrictions imposed by publishers, are a cancer. 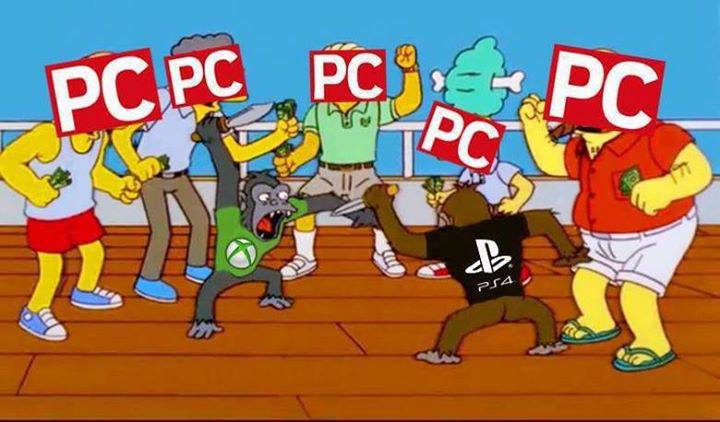 If tomorrow they’ll say: “Do you want to watch this TV channel? Well, then you have to buy that other brand television”, Would you accept it? But hey, you already have a TV, and despite it have some different features, has similar quality and works exactly the same for the same purpose.

We would not accept that.

“Sorry, Batman movies by Christopher Nolan aren’t compatible with this Microsoft TV, you have to buy a Sony one.”. It looks like a monstrous scenery; unacceptable; yet it is exactly what is happening from decades and accepted, more or less consciously, by all gamers around the world.

For too long this evil, which has very complex origins and historical reasons, held hostage the entire world of video games. What gamer would not want to say goodbye forever to limitations that prevent them from being able to play any game on a single universal platform?

Some software companies are trying to push a universal platform based on PC. That’s the case of Valve, with Steam Machines and the whole consortium behind the development of Vulkan[1] that aims to fight against the monopoly of DirectX 12 that are not (on purpose) compatible with all not-Microsoft operating systems.

At the next GDC 2015, Valve and the whole Khronos consortium (which also includes Sony, nVidia, AMD and many others[2]), will present[3]Vulkan and that will be an historical event for the future of video games.

#glNext vs #directx12: The real next-gen war. The War of Wars, perhaps the most decisive since video games were born. pic.twitter.com/WopXaI4lch