Steam Machines and the future of gaming console

Personally I am intolerant of exclusives and stand with annoyance with timed exclusives. Same story for almost all serious players on the planet. Who’s allergic to universal platform concept, are some companies who profit from console hardware.

Think you can play Naughty Dog and Remedy titles on the same platform. Think you can enjoy emotions offered by Halo or Uncharted. No religious wars, just play your game from the same console or PC.

Sony and Microsoft are fighting from many years for reasons far more radical than their brand new consoles. In recent years both have sensed a potentially very rich market beyond video games: home entertainment. Cloud, music, TV, movie streaming and much more.

If there’s a man who first saw the potential of home entertainment and in particular of digital delivery, this man is Gabe Newell, the godfather of PC gaming, the one who gave new life to a market that seemed destined to his fate.

Steam Machines, are an hybrid project that aims to combine the ease of use of home console to versatility and power of a PC.

Gabe Newell believes that open systems are the future of a market that is destinated of profound changes. More than ten years ago, when he launched Steam, Gaben spoke of importance of Internet and Digital Delivery for the videogame market and how would supersede retail sales of games. Some considered him crazy.

After more than ten years, we can say that Gaben was right: digital sales have supplanted those retail[1] and were born several digital stores like GOG and Origin. Steam meanwhile has become the market leader and can rely on a community of over 75 million players.

DirectX 12 and Vulkan: The future of high-performance graphics

Steam Machines are based on SteamOS, a GNU/Linux distribution based on Debian[2]. The graphics engine of the operating system will be Vulkan (free and multi-platform graphics API promoted by Khronos consortium), as free alternative to DirectX (proprietary APIs for game development on Microsoft systems).

At present, play on PC means playing on Windows. The vast majority of PC games using DirectX, are not available on GNU/Linux systems allowing Microsoft to maintain a lead position in operating systems for gaming. So far has been impossible to break up this monopoly, especially since no one has been interested in investing on Linux gaming. 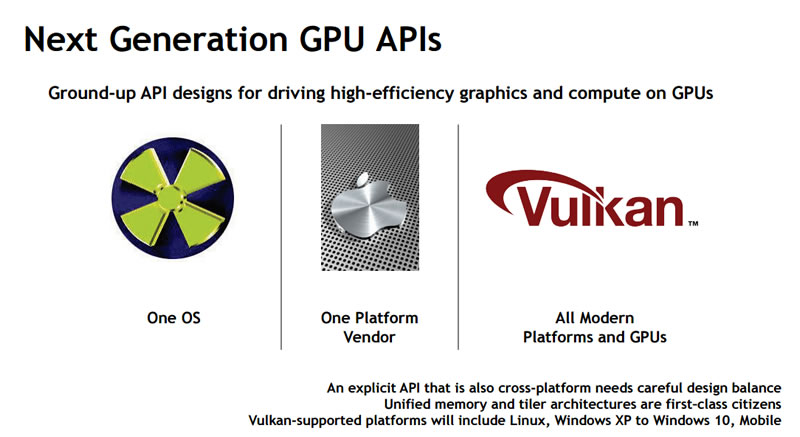 At least until now. The challenge was officially announced at GDC 2015[3] during the presentation of Vulkan (heart of SteamOS and all future Linux-based consoles) and DirectX 12[4] (incompatible, by the way, with all non-Microsoft operating systems).

“Customers are getting unnecessarily pissed off, and developers are losing out on sales thanks to the restrictive measures […] Giving customers a great experience and thinking of ways to create value for them is way more important than making it incredibly hard for the customers to move their products from one machine to another.”Gabe Newell

It is interesting to note also that in the consortium that supports Vulkan, near big names like nVidia, Google, Apple and Intel, there’s Sony.

Although you can install Windows on Steam Machines, this would go against their philosophy, making vacuous their existence. Since most games are based on DirectX, Steam Machines aren’t able to run natively all of them, limiting the choice to those compatible with Linux.

Unfortunately DirectX, as well as Windows, being de facto monopolies[5], will be tough opponents for Valve, although in technical and functional terms, Vulkan compared to DirectX 12 could offer similar, if not superior, performance.

Gabe Newell is not a philanthropist, is an entrepreneur who aims to bring new users to make purchases on Steam. However Gaben undertook a courageous path, indicating a perspective that until a few years ago was considered utopic by any enthusiast: one console, different machines, compatible with each other, putting the focus on players interests and not only superstructural, that has forced all players to suffer restrictions for decades.

If you want to know more on that argument, please read: What is the best Video Game platform?